The Media Day is More Than 24 Hours

On average, Americans spend 12 hours of their day consuming media in one form or another. In fact, reading this article will account for about 5 minutes of that time in your day today. Television accounts for 3 hours of your day with Internet a close second at 2 hours. The report published last year by ZenithOptimedia measures media consumed in its traditional form—for example, broadcasts on television sets and newspapers in print. Watching videos on the web or reading a newspaper’s website counts as Internet consumption. 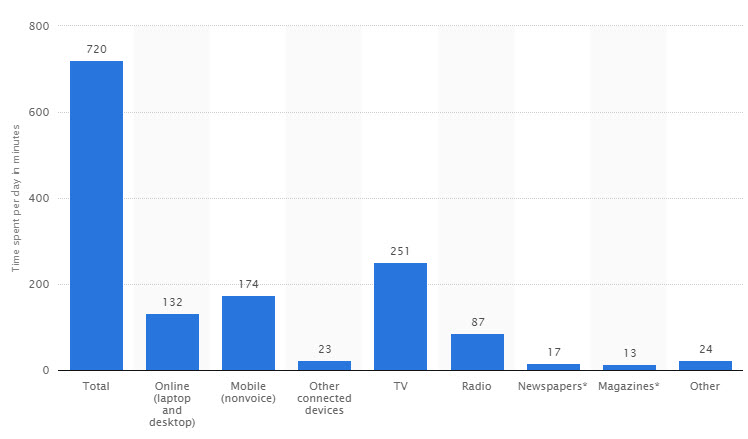 Considering that people are awake an average of 16 to 18 hours per day, the total consumption of 12 hours of media may seem virtually impossible, but to be fair, you have to consider that a lot of that time is spent while doing other things. In fact, if it weren’t for multitasking we probably wouldn’t get anything done at all. The reality, however, is that in a “media day” we are not limited to the traditional 24 linear hours we use to measure time. For example, everyone reading this has at one point or another picked up their phone, tablet, or laptop during a commercial on television. This creates a phenomenon known as “multiple stream media traffic”. As the number of simultaneous media streams increases, and our multi-tasking increases, a lot of content falls into the background; and as we continue to increase our multi-tasking, the total hours will grow despite the fact that the total number of physical hours remain constant. This increasing level of multi-tasking creates competition between media streams which reinforces the necessity for us to adhere to the golden rule of advertising:

In a multi-tasking, multiple media stream world the question of where and how to put your advertising dollars can become a daunting task with multiple vendors parading pages of statistics regarding consumer behavior and the reach of their platform. Today, we are going to boil this down to the absolute simplest formula possible. Ready?

There are only 4 ways to sell a product:

Everything falls into one of those four simple categories. There are of course subsets within each, and I would never try to convince anyone that a newspaper ad is the same as a direct mail piece, or that video pre-roll is the same as an SEM campaign, but those are print and digital campaigns

How to allocate your advertising spend

This is where the rubber meets the road, and budget is going to determine everything! In the automotive world, we know from previous studies by NADA that the average shopper visits between 1 and 2 dealerships before purchasing. JD Power also recently released a report indicating that 96% of Americans began their vehicle purchase path online. So throw most of your budget at your digital spend, right? NO! Digital MUST be a component of every advertising plan, but digital marketing is not intrusive media. In fact, most digital marketing is more like a taxi. The customer will go nowhere until he or she decides on a destination, and this is where the advertising mediums that exist farther up the marketing funnel come in to play. To see a complete picture of the marketing funnel and where different media campaigns apply, click here.

The proper use of intrusive media to help strengthen your brand is critical. This gives you the advantage of having an in-market shopper tell the taxi go directly to your store to start their search. Choosing the right blend of intrusive media is influenced mostly by budget. Basically, if you can’t afford to be there with both a high reach and frequency, then stay away from it altogether. If you can only afford to do 3 weeks on a medium versus 4 to reach your goal, then do so, but I would never recommend compromising beyond that. For example, if your budget forces you to choose between 2 weeks of cable, or 4 weeks of radio at a higher frequency, then choose radio every time.

Plan by Quarter or pay more

Too many times, I see clients budgeting month by month rather than setting up a marketing plan for an entire quarter at a time. It requires exactly the same amount of work to layout an entire quarter at once rather than in monthly increments and in most cases, it also gives you additional buying power when dealing with radio or cable representatives. Your monthly incentives may change, but your themes and best-selling models will not. Don’t sell yourself short and consume more of your time than necessary with the trappings of launching monthly marketing campaigns.

As we approach the second quarter, force yourself to go through the exercise of auditing your expenses across all your marketing efforts. That means listing out EVERY spend you have in your budget. Include your direct mail, television, radio, website provider, SEM, SEO, newspaper, and don’t forget to list your 3rd party lead providers such as Autotrader.com, Cars.com. If you’d like a worksheet to help you lay everything out, give me a call at 813-334-5291 or let me know on Linkedin and I’ll get something over to you.